Answering to a fellow enthusiast from Germany, on the matter of the FIAT G.91R/3 WGAF nr.32+39, this one is one of the FIAT's that never saw operational service after coming from Germany. The 32+39 was first noted as stored at Air Base nº2, at Ota, in 1984 (l/n 1987), used as many others in the air bases of  Tancos (BA3), Sintra (BA1), and Montijo (BA6), as decoys.
Many of the late batches of FIAT's received were used as spares, such was the case.

Later in the 80's this aircraft was reported as displayed at Celourico da Beira, in a public garden, between the local cemetery and the municipality public swimming pools, and in 7June 1999, I confirmed that this was painted with the WGAF nr. +69 (the first part of the number was painted over).This could well be nr.32+69.
It later showed up near the IP5 road, near the exit to Celourico, apparently dumped, and during a visit on the 5th May 2001, by closer exam, the paint had faded out a bit more, thus revealing that this was WGAF 32+69, consequently the c/n 91-538.
This aircraft was n/n by June 2001, possibly moved South, to Canas de Senhorim, and was  noted during a public protest in the National Assembly in Lisbon.
For my part I already tried on a number of occasions to find out where he was but, no luck ... yet…

As for the 32+39, most likely was used at Ota for the fire-fighting school as … burning material or, it could be one of the many that survived until the application of the Conventional Arms Reduction (CFE) of the 90’s and was consequently scrapped. Can’t tell... yet ... 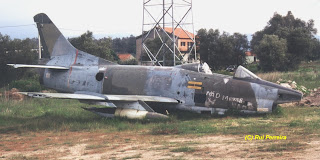 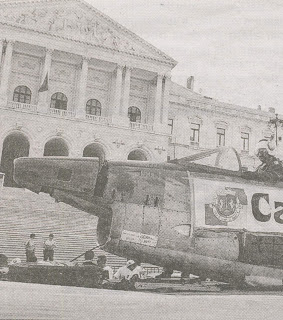